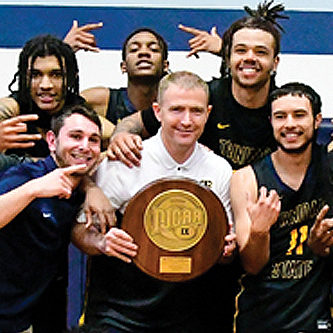 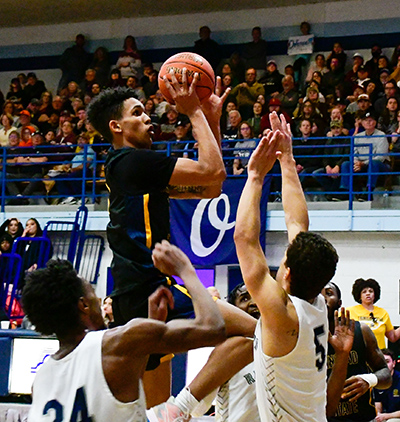 It was a game for the ages. Two rivals fighting it out, point-for-point, in front of a packed house of excited fans, and the winner would claim the Region 9 title and a trip to the NJCAA National Basketball Tournament in Hutchinson, Kansas.

Otero, the top seed in the south hosted Trinidad State, the number two seed. The teams had split their two prior meetings this year and the crowd knew from the opening tip that this game was going down to the wire. The crowd was amazing, a packed house, and the two student sections started in before the National Anthem even played, chanting across the gym at each other. Neither section would be outdone as they all stood and cheered for the entire contest. By the end, every fan in attendance would be on their feet.

The Trojans, who had defeated Casper College on Thursday afternoon and Western Nebraska on Friday night to reach the final, came out strong and took a double-digit lead midway through the first half. The Rattlers, who had defeated Eastern Wyoming and Laramie County to get to the title game, fought back and cut the Trojan lead to five points at half time. The second half saw the teams go almost basket for basket as the lead changed hand several times. Each time the Trojans needed a big shot they got it and the Rattlers would answer right back.

The clock ticked down and neither team would back down, but when Otero took a 93-92 lead with just over 20 second on the clock it looked like the Trojans could be in trouble. TSC was unable to get a shot to fall on the next possession and Otero got the ball with less than five seconds to play, forcing a Trojan foul to stop the clock. Otero made the first charity shot but missed the second. Dylan West pulled down the rebound and called a quick timeout with 3.9 seconds left. The energy in the gym was ready to explode as Olson Nicholson got ready to throw the ball in. The Trojans ran the play Coach Mike Folda designed for them to perfection. Jailen Bedford sprinted into the backcourt and got the ball from Nicholson, took a couple of dribbles to cross midcourt and let the shot fly from right next the half court circle. The Trojan fans exploded as the shot hit nothing but net and the celebration started. The referees talked about it and put .4 seconds on the clock, but the Rattlers were unable to get the ball in as Nicholson batted the pass away and the clock expired. Final score Trinidad 95 – Otero 94. The Trojans are the 2022 Region 9 Champions, and the celebration was officially underway.

Nine Trojan players took part in the contest, and all played a pivotal role. Blake Cesar, Gary Johns and Gregory Beatty all came off the bench to provide defensive support and Robel Desta hit a big early three before being sideline due to foul trouble. Dejour Reaves, who had an amazing season for the Trojans, set the pace of the game, finishing with 11 points, 10 rebounds, five steals and three assists. Nicholson was fierce on defense and added eight points and five boards to the team stats. Bedford came off the bench to have an amazing shooting performance, scoring 20 points while shooting four-for-five from behind the stripe. The Rattlers didn't have an answer for Javeon Tolliver or Dylan West. Tolliver was lights-out shooting the ball, finishing with a game high 27 points and six 3-pointers. West was unstoppable in the paint, finishing the game one assist shy of a triple-double, 26 points, twelve rebounds and nine assists.

The region championship is the first for Trinidad State since 1986.

TSC will now move into the bracket of 24 teams playing for the National Championship. The Trojans, now 18-12 on the season, will face 26-5 Northwest Florida State College in the opening round. The game will take place on Monday, March 14 at 4:30pm (CT). 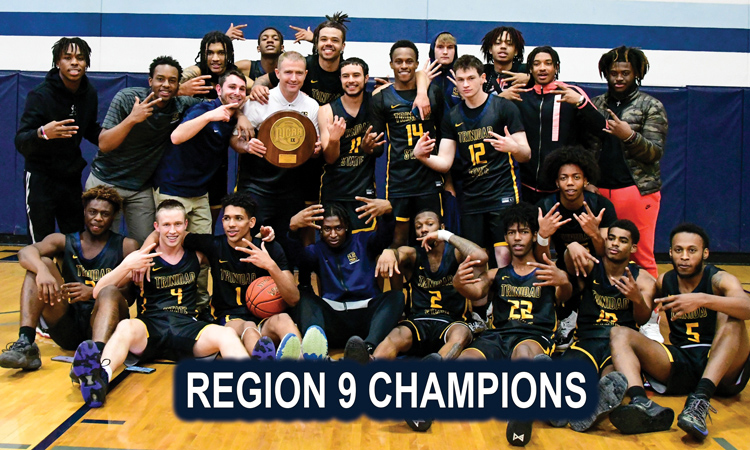