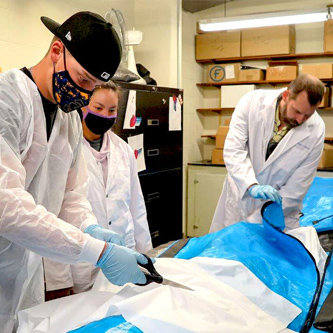 “I couldn’t believe we had human bodies (cadavers) to learn on. I learned more than I can imagine. It was like tasting the appetizer to a full-course meal that I want to have,” said nineteen-year-old Austin Hall. Hall has his heart set on being a surgeon.

“There’s a calling on my life to help people in some way,” said Hall. After completing A&P (Anatomy and Physiology) with Dr. Kevin Walker, Ph.D, Trinidad State biology instructor, Hall has set his sights on neurology and cardiology as areas of surgical interest.

Walker is “highly organized and he made A&P really exciting as he related things to life. He is a very in-depth professor, and the class blew my mind!”, said Hall, who plans to complete his Associates of Science at Trinidad State and move on to a four-year college and then on to medical school. Initially, Walker wanted to follow in his father’s footsteps and become a general surgeon and physician, until he had the opportunity to do research on timber wolves. Fascinated by the wolf for many years, he loved being outside doing his research and he loved his teaching assistant position in his college biology and chemistry classes. He knew then that he was meant to be a researcher and a teacher, and the study of biology would win his heart - specifically macroecology which deals with the study of relationships between organisms and their environment. 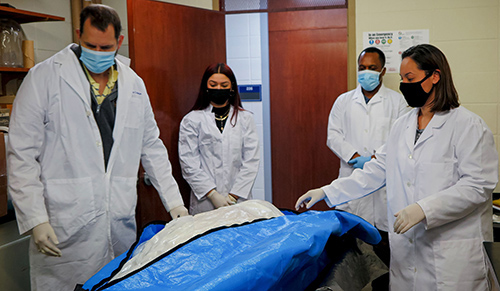 Learning how all the systems work together is knowledge he has taken into his cadaver labs. His biology and anatomy/physiology students have dissected individual organs from pigs, such as a heart “but working with that particular organ doesn’t do justice to what the heart does in relation to the vascular system,” said Walker.

Reagen Rico (32), who was raised in Trinidad, started college at Trinidad State right out of high school. “My head wasn’t in the right place,” she said. “I wasn’t focused, and I didn’t do well. I dropped out of school and went to work fulltime.” She had taken a number of nursing prerequisites before she quit and had earned a Certified Nurse Assistant certificate, but she said, “If you don’t have a good degree, work can be very hard. I know from experience that CNAs work very hard. I have two young children (2 and 7) and I want a stable job that pays well to support myself and my children.” Rico plans to graduate and become a registered nurse in 2023. Although she’s not sure yet which area of interest she will pursue, she loves babies and kids and is leaning toward obstetrics.

“I’m a hands-on learner and I like to feel and see. I loved working with the cadavers and going from the surface and working through the layers and seeing muscles and bones. That’s what it looks like in the book, and this is what it looks like in real life,” she said. “I thought it was really fascinating. It was a great learning experience. I learned how whole systems work.” She said one of her favorite animal dissections was a pig’s uterus that had little pig fetuses in it. 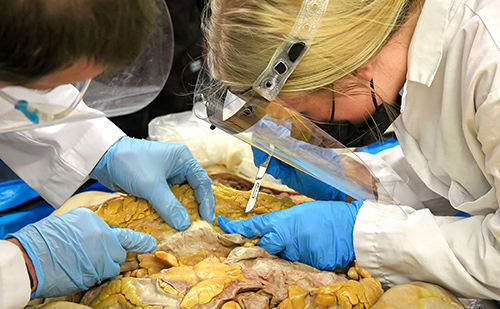 “After dissecting cats in high school,” said 17-year-old Hoehne high school student, Mara Salbato, “it was really strange to move from animal to human.” She explained how the process is done very slowly, layer by layer and it’s more about scraping than cutting. Salbato, who recently completed A&P 201 said the class reinforced her interest in medical research and pathology. “The instructor was very helpful, was easily accessible and always willing to answer a question. My favorite parts of the class were the labs - using the microscopes and dissecting -and seeing real life application of the things we were reading about. I really liked it.”

At least five other Colorado community colleges are using real human cadavers to teach human anatomy. At one college, students are transported to a local hospital where they observe the process. At another, the cadavers are brought in already dissected. One of the colleges uses an anatomage virtual dissection table where life-sized human and animal bodies can be studied electronically. At two other colleges, students cannot dissect until they have passed the first two biology courses (201 & 202) and are taking Biology 203. At Trinidad State students can begin dissecting in their first semester of biology or A&P.

For Walker, establishing a cadaver lab was time consuming. Working through the red tape and locating a source from which to secure cadavers took time, but once approval was received, Walker set up his lab and purchased two cadavers from a Colorado source. Most often donors who give their bodies to science for research range from age 70 to 90 when they die. The female cadaver the students began dissecting was 100 at the time of death. The students have been working on her musculature system. One assignment for Austin Hall was to cut into her hamstring and separate the skin from fat. “We separated muscles from blood vessels and learned how they are interrelated and why. We were taught the whole human anatomy. It was most definitely my favorite class,” said Hall.

The male, who died around age 84, was overweight and students had to remove about 55 pounds of abdominal fat in two separate attempts to access his organs. They opened his chest cavity to study the digestive, respiratory and cardiovascular systems. “You can feel the blockage in his heart plumbing,” said Walker, “and his spleen is shriveled up.”

The class has been working on his internal organs. His musculature on one side of his body was much smaller than the other suggesting the cause of death may have been a stroke. His lungs have a black substance leading the students to believe he either smoked or worked in a mine. The students have found fatty deposits in organs as well as cancer that was growing between his heart and lungs and his heart was “humongous” Hall said, almost twice its normal size according to Walker. The students are seeing how fat accumulates in organs and in the abdomen. “It changes your idea about weight management,” said Walker.

“Students are not required to dissect,” said Walker. Although some students choose not to, all the students are involved in the work even if as spectators only. Some students take biology as an elective, like student athletes, but the nursing students are required to take biology as well as A&P. Walker sees no difference in the students’ skill sets regardless of the reason they are taking one of his science classes. Before any dissecting is done, students must sign a strict contract detailing the dos and don’ts of dissecting. The cadavers are then introduced to determine a student’s comfort level. “The athletic students are curious and have taken great interest in the cadavers,” said Walker. “They are incredibly careful with the cadavers and sometimes outperform the A&P students.”

Cadavers are in body bags when picked up and transported. Their heads, feet and hands are individually covered as well as their genital areas making the dissecting a little less threatening, especially for high school students.

Not once has Walker heard a student be derogatory or joke about the cadavers or a particular organ. They are respectful, excited, and meticulous with their work. They take pride in their work and almost all students choose to work as teams.

The cadavers are embalmed and do not need to be refrigerated. Once they are dissected, they will be used for observational and physiological analysis in future semesters.

Born and raised in east Texas but always drawn to Colorado, Walker says, “Trinidad has such a rich history. It’s everything I’ve been looking for. Ever since I was a little kid, I’ve loved Colorado. I love it here (Trinidad). I love the school. I like working with the students and the faculty and staff. It’s a complete package. It’s a family-oriented school. I’m glad I made the choice.”

Austin Hall likens Trinidad State to a “bonfire in a fireplace – a lot of interesting things in a small school,” he said.